Jung Sing is the lead singer for the band Silent. He has also been a member of All Leather, Maniqui Lazer. Last year under the label Three One G they released the album “A Century Of Abuse”, which was one of the best albums to come out in 2016, even if it went somewhat undetected. 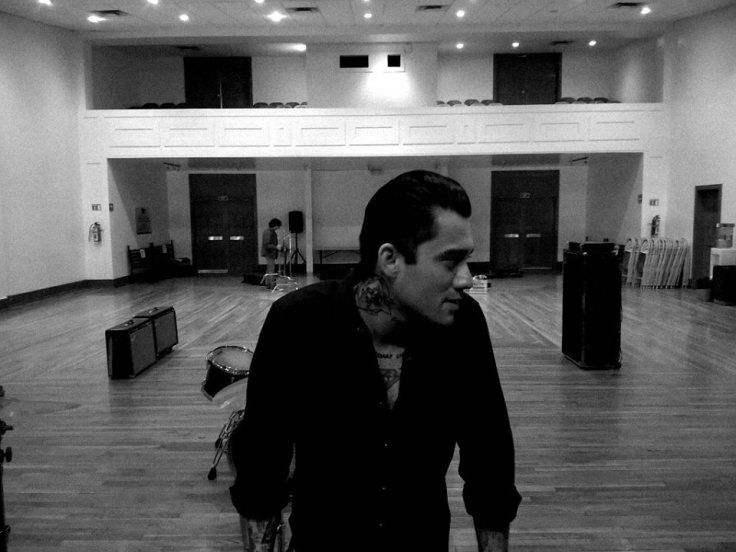 Jung was kind enough to answer a few questions for our first interview. This is what he had to say about a few things…

What and who is Silent?

SILENT is a band that is born in Mexicali, BC (México) from an idea that Alex Lara and I had. At the beginning it was a duo, as the creative process moved along, with the creation of the songs we started thinking about additional musicians and it is there where Rodo Ibarra, with whom I had worked with before (Maniqui Lazer, Chrome Eye, Blackcells), and Andrea Varela on drums joined the band. And with that, the sound of this project started evolving and SILENT was born. 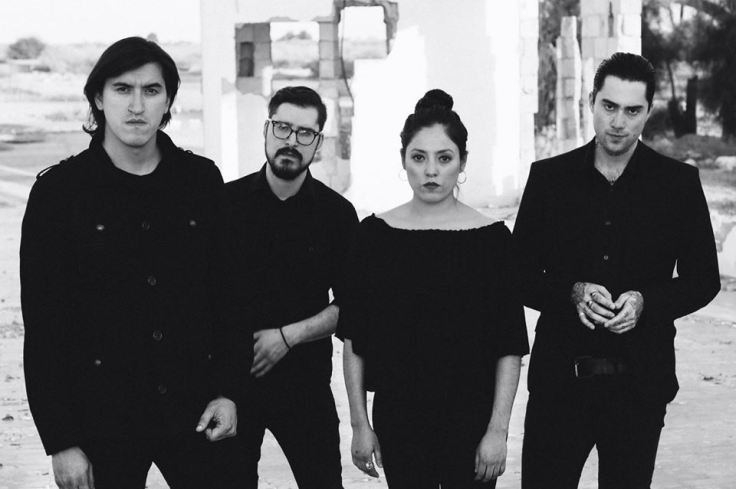 Why release the album in Three One G?

We decided on Three One G because they are one of the labels with the most credibility out there, and whom throughout the years have released some of the most musically interesting albums. Their ideology is still punk and they still believe in the DIY state of mind and that makes us feel right at home. On a side note, I have a very strong friendship with Justin Pearson, we were even in a band together called ALL LEATHER, so everything fell into place for us to release our record there.

You’re a Mexican band singing in English about struggles/abuse in Mexico, yet somehow now it feels bigger than that. How can you translate that into an emotion to the public?

The lyrics that I write are based on a lot of things that I’ve been a witness to in my life. I also believe that Mexico is going through one of its worst moments of its existence and don’t forget about the horrendous government that is in office.
I think that the way that I can create an emotion/connection with the public is by making music with substance, with lyrics that talk about something. On any given day you see people singing songs about narcos, about how to be a “badass” that goes around killing people and they sing these song like if it’s something to be celebrated, like it’s an achievement or they sing songs about how to be high all night long and they do this unconsciously, these songs get stuck in their heads. So in that same sense I can do the same but instead where we get to talk about rising up and fighting for our rights or trying to move things in a certain direction with a specific intention to motivate us/you/me.
I think that’s one way where you can create stronger emotions towards the public.

The name of your band is Silent, the name of the album is A Century Of Abuse, the vinyl is white. Now, if I’m looking too much into it there seems to be a play with imagery and names. It feels like there’s a kind of innocence/purity (LP) vs the title of the album vs the name of the band. Now, it could be political but I got the sense that there was something more to it, it wasn’t just a coincidence about all 3 things. Or were they?

I think that you saw something that we didn’t at the time of printing the album and your vision of all 3 things mentioned there sound very good to me, I think I’m going to have to go back and think about the art all over again, hahaha. But yes, it does have a little bit of everything there. SILENT as a name for the band identifies a lot of what we all are living through as mexicans at this time in life. How we all choose to not speak up and continue with our comfortable lives as we think they are instead of standing up and speaking out against what we think this corrupt and abusive government that we have AND on the other hand how we stay silent/quiet by the media and easily entertained with our soap operas and dumb t.v shows.  I think that’s why SILENT has a strong name in these times. A CENTURY OF ABUSE alludes to all the abuse that we have been subject to by our government across so many years and each time is getting worse and they just manifest themselves so shamelessly and vile,  that’s why we feel that the title of our album has so much meaning and carries weight, at least to us it does. The white vinyl I think that decision was more aesthetic than anything else, we believe it’s a serious and neutral color just as black would be, but as you mention it now gets me thinking and the title of the album and the cover art are chaos, and the white vinyl could represent the peace and calm in the aftermath. 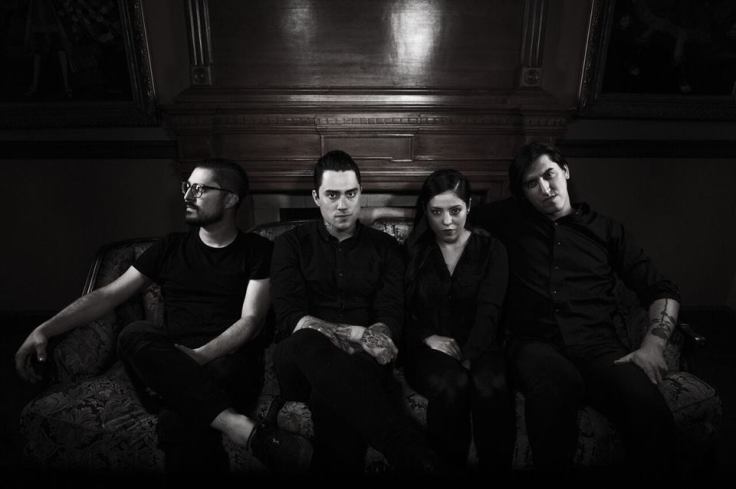 Why Fax as the producer? The songs ‘Near To Us’ and ‘Damage and Violence’ sound like his work through the band’s hands. Am I too far off on that?

FAX is a friend of ours of many years. He produced albums by Maniqui Lazer amongst other things that we’ve been a part of. We decided that in this album he had to be a part of it because he has such an elegant and subtle way of working when he’s producing and album. With that in mind we believed that it would work great with the music from SILENT. Well of course that the songs “Damage and Violence” and “Near to us” have traces from him, the rest of the album does too! and that is why we decided to work with him is because he always leaves a little bit of him in his productions.

I believe that the secret weapon in your band is the drumming. That’s the one thing that gives the band a sense of urgency, a sense of anger, a sense of hope. Now, don’t get me wrong, Rodo sounds like a true professional and between both of them gives you the base of what the band sounds like. The guitar adds this layer to cover or nourish the song. And you, well you give it the immediate punch. Your voice and lyrics and delivery sound powerful, which I guess is what makes Silent such an amazing live band.

I believe that drumming is the most important part in music. To us the drumming is like a call to battle in each song or at least that’s what we are looking for. When we were writing songs Andrea was finding a way to transmit anger and force as if we were an army marching into battle, like a tribe in a conjure, a celebration. Something with intensity is what we are looking for.

There was a picture in social media where you are singing and you’re carrying a child while doing so. How did that happen? What did you think about that or what did you feel? How did the band react to that?

That was in Philadelphia, we were in the middle of our set when I saw my friend Ana, she’s from Mexicali too but moved to Philly a few years back, and she was there with her family, husband and 2 sons it was then when I saw one of her son’s jumping and singing while we were playing so in that moment i thought that I should bring him up on stage so he could share and transmit his energy, maybe he didn’t even know what I was singing about but the music had him in a trance that was the part where I felt that energy, it was when I would scream and he wouldn’t even flinch to the contrary he would hold me closer and grip tighter and that felt really powerful. I think it was a powerful experience for both of us, the rest of the band members where just floored at how intense that was!

With that question answered, what is your target market? How do you want to reach them? Are you aware that you can influence/impact children/young people with just one presentation?

From our end we make music obviously because we have been musicians for so many years and we love music and IF through this medium we can impact our society in some way then I believe that we have accomplished our goal. As a matter of fact we don’t shoot to a specific target market, we will go as far as this takes and we will reach as far as we can, we will not limit ourselves to a specific group of people. Whoever wants to listen to us please do. About children and the young people I believe that if you can create some sort of consciousness form an early age it could be very beneficial in the future, I am by no means stating that I am the best citizen around, but I do believe that it’s in the details all that helps to have and develop a better society.

In my opinion your album was one of the best releases of last year, period. I don’t think that there’s a Mexican/Latin band that sound like you do either on album or live. What are the plans for you guys next?

Thank you for saying that, we released one of the best albums, that really excites us and it makes us want to create more and better music!
Our plans for the time being will be continuing to promote our album and continue with this tour and see just how far it can take us. In November we are going to go back to the studio, we already have a few new tracks for the upcoming album. So we’ll continue writing on our free time and touring with the time we have left, obviously not counting our personal lives and work outside of SILENT.

As an artist where do you find inspiration?

I believe inspiration comes from different places. Each song that I write for SILENT has arrived through different moments, situations and avenues. I think that our surroundings are inspirational in their own way and if you write from what’s around you on a day to day basis, well then it becomes real and coherent. It is from there that I find and take inspiration to write.

What are 5 things (books, films, albums, etc.) that you would recommend to our readers.