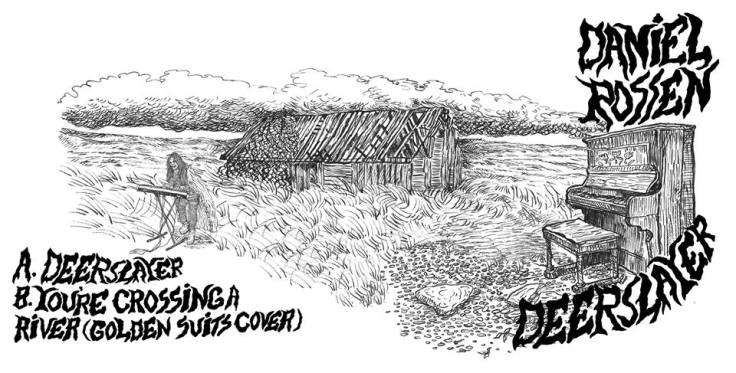 In “Deerslayer”, the piano makes the song sound a little ‘Beatlesque’ but the guitar, the arrangements and Daniel Rossen’s distinctive-beautiful voice makes it darker, sinister, we can imagine this song being part of the soundtrack of a film.
It’s the type of songwriting/composing we can’t have enough of.

“Deerslayer” will be released on April 21 as part of Record Store Day, it includes a B-side, a cover of ‘You’re Crossing a River’, originally released by Fred Nicolaus (Department of Eagles) for his Golden Suits project.

“Announcing a special release this Spring. Deerslayer is a song from recent times that hasn’t found a proper home. Though it doesn’t quite fit in with other tunes I’m working on now, I’d like to put it out into the world.

If you happened upon an old version of this tune that was floating around my semi-defunct 20th century style website, this new version is rounded out with horns and extra instrumention.

You’re Crossing A River is one of my favorite recent tunes of my old DoE bandmate Fred Nicolaus, and I had a good time making this version. Psyched to be able to give it a physical release as well.

And anyway, it feels like it’s time I put something out. Damn it.

In the near future (can’t commit to a timescale more specific than that) I will try to finish the rest of the jumble of songs and fragments that I’ve been mulling over, throwing out, retrieving from the trash, reworking, and starting over for the last 5 years and hopefully come back with an actual album length release…