Stephen Malkmus shares his first video for the song “Viktor Borgias” of his new album “Groove Denied”, out 3/15 on Matador Records.

The video is quite simple in the way that is Malkmus in a club dancing to laser lights, 80’s pop synth music with a touch of funk and new wave. Which sounds like a weird mix you wouldn’t dare touch with a 10 foot pole, however it works. Malkmus has the rhymes to back up the synths. The dance moves to challenge the avatars dubbed Random Businessman and Arianna.

Malkmus explains that “It’s fun to mess with things you’re not supposed to”, and in his case he’s right. This could’ve had disaster written all over, and is such a pleasure to listen to something “out of left field” from him since we are so used to listening to him with a guitar in the background.

Simon Reynolds wrote the bio better than we could do justice or anyone could explain, so please read:

“When Stephen Malkmus first arrived on the scene in the early Nineties, as frontman and prime creative force in Pavement, the area of music with which he was associated couldn’t really have been further from the techno-rave sounds of the day. Electronic dance music, then as now, was about posthuman precision, inorganic textures, and hyper-digital clarity. Whereas the lo-fi movement in underground rock championed a messthetic of sloppiness, rough edges, and raw warmth – a hundred exquisitely subtle shades of distortion and abrasion. “Imperfect sound forever” was the rallying cry for a micro-generation of slacker-minded dreamers and misfits.

Fast forward to the present and here comes Malkmus with a surprising new project that embraces the very digital tools and procedures he’d have once gone out of his way to avoid. Groove Denied – Stephen’s first solo album without his cohorts the Jicks since 2001 – was made using Ableton’s Live, a software sequencer and “digital audio workstation” that is the preferred tool of discerning techno producers and deejays worldwide. Instead of a human-powered rhythm section of electric bass and drums, Malkmus’s arsenal further includes drum machines, along with a host of plug-in FX and “soft synths” (digital simulations of vintage electronic hardware that inhabit your computer rather than take over your entire living room).

For the first time on record, what you hear here is just Stephen and the Machine(s).

But Groove Denied is not a full-blown plunge into EDM or hiptronica, into the soundworlds of Deadmaus, Villalobos and Skee Mask. In fact, there aren’t any purely instrumental tracks on the album. Every song is precisely that: a song, featuring Malkmus staples like an artfully askew melody and an oblique lyric. But Groove Denied is Stephen playing hooky from his customary way of going about things, jolting himself out of a comfy routine. As Malkmus commented recently in a video interview, “It’s fun to mess with things that you’re not supposed to.”

This departure from the tried-and-tested stems back to earlier in this decade, when Malkmus spent a couple of years living in Berlin and was exposed to the city’s vibrant club scene Back in the Nineties, Stephen had given rave culture a wide berth, in part because of bad personal associations with the drug MDMA (he’d had “a really really bad trip” on Ecstasy in 1987, bizarrely on a visit to New York to see Miles Davis perform). But in Berlin, thanks to a younger deejay friend, Malkmus made forays into the city’s world-famous all-night party scene and became fascinated by techno. “The music can be great… you can zone out, dance, and focus on music – or just get wasted!”

It would not be entirely off-base, or an overly cute rock-historical reference, to describe Groove Denied as Stephen Malkmus’s Low. Although largely recorded in Oregon, the bulk of the album was written while he was living in Berlin. Updating his home studio with Ableton and teaching himself rudimentary Pro Tools, Malkmus “started fucking with effects and loops”. He compares the process of track-construction to the way his kids “used to make these girls on my iPhone – choosing hair colour, dresses, etc. That intuitive swipe and grab thing. Chop and move the waves. Apple computer scroll style of thinking.” It’s a very different way of making music to the feel-oriented way of coming up with chord progressions and rhythm grooves on a guitar alone or jamming with a band. And in fact, electric guitar – while it does feature on Groove Denied – is really “just color for the most part”.

Yet while the methodology behind Groove Denied is absolutely 21st Century, the reference points for the sound-palette hark back to the pre-digital era. “The electronic music side of the album, I wanted it to be sonically pre-Internet,” explains Stephen. “So the EQ-ing is a bit 1970’s, that sloppy DIY sequencing. And the influences are kinda 1981 post punk – actually quite British.” “A Bit Wilder”, one of the stand-out cuts, specifically recalls Cabaret Voltaire, its slack-stringed dank-with-reverb bass a dead ringer for the Stephen Mallinder sound. “Yes, I was thinking the Cabs – and Section 25, whose 1981 album Always Now I think is a serious underdog stoner album. That grey industrial Martin Hannett sound. But also all these cute DIY group that imitated The Cure back then – loners with 4-tracks tape recorders and dreams of “Killing An Arab”.” Malkmus says he was trying to conjure or reinhabit the “fan perspective” on things like Joy Division and the Cure – the sort of “getting it a bit wrong” that unintentionally brings something new into the world.

Groove Denied is frontloaded with this Cold Wave redux sound – a style we’ve never heard from Stephen Malkmus before. Opener “Belziger Faceplant”, for instance, features a most peculiar processed vocal that sounds withered and grotesque, like a deflated wrinkly balloon still lingering on in your house weeks after a party. “I envisioned ‘Belziger Faceplant’ as made by someone off their head after a night out in Friedrichshain,” says Malkmus, referring to a district of the former East Berlin now rife with techno clubs like the legendary Berghain. “Coming back at 5 AM, firing up the laptop in the morning light and trying to make a song, but the instruments are tripping over each other. You can’t even speak because of all the Ketamine or whatever!” Malkmus adds that he’s never tried K but “for some reason I imagine it like that”.

Then there’s “Viktor Borgia,” a title that playfully merges the name of the comedian-pianist and the ruthless dynasty of Italo-Spanish nobles. With its stately melody and the almost-English-accented vocal, the coordinates here are early Human League or even Men Without Hats. “Yes, I was thinking things like Pete Shelley’s ‘Homosapien’, the Human League, and DIY synth music circa 1982. And also about how in the New Wave Eighties, these suburban 18-and-over dance clubs were where all the freaks would meet – a sanctuary.”

“Forget Your Place” features another eerily wobbled vocal a la “Belziger Faceplant” plus dub-style detonations of submarine sonar and nagging bleeps. Frankly, it sounds pretty darn wasted. “Like ‘Belgizer’, this is a pretty solid Ableton-based track – moving waves around, finding a trippy loop and throwing an echo on it,” explains Stephen, adding that “at times it feels almost childish, working with Ableton – like finger painting. But ‘Forget Your Place’ also makes me think about death – don’t ask me why!”

Alongside the early Eighties “minimal synth” and industrial influences, the other main palette of tone-colors audible on Groove Denied is closer both to Stephen’s comfort zone and to what his fans would expect from him: “warped psych,” as he terms it, that avant-garage tradition of dirty guitars and ramshackle grooves, except that in this case, it’s “one person pretending to be a band.” That illusion is pulled off magnificently on loose ‘n’ swinging tunes like “Come Get Me” and “Love the Door,” although the electronic element manifests still with the crisp and prim pitter of drum machine beats and a spume of Moog frothing all over “Door”. Then there’s “Rushing the Acid Frat”, whose title came from Stephen’s memories of a student fraternity at the University of Virginia that, unlike the typical beery bro frathouse, had a “Grateful Dead druggy tie-dye” vibe. Malkmus imagined “Rushing” as a “Louie Louie”-style shindig rumpus to soundtrack a “Star Wars bar scene in such a frat… It’s kinda 12-bar, but gigged with psych lyrics”.

As the album enters the homestretch, it returns to more familiar Malkmusian terrain, with a warmer, grittier sound. “I did frontload Groove Denied with the stuff that signals “80’s/cold,” he says. “That stuff excited me the most – and it sounded braver. If I had another year, it could have been all in that style.” Still, with the second half offering gorgeous tunes like the hazy-lazy ramble “Bossviscerate” and the glittering “Ocean of Revenge” – both graced with his signature style of odd-angled melodic beauty – who’s complaining? Mellow closer “Grown Nothing” feels like Malkmus easing back towards the sound of his recent album with the Jicks, Sparkle Hard. In fact, although it has been released after Sparkle, 70% of Groove Denied was completed before work on the Jicks record. Indeed, Malkmus’s explorations with sound-processing influenced that album, most notably with the unexpected appearance of Auto-Tune on a couple of tracks.

Groove Denied will shake up settled notions of what Malkmus is about and what he’s capable of, repositioning him in the scheme of things. But looking at it from a different angle, his engagement with state-of-art digital tech actually makes perfect sense. After all, Nineties lo-fi – the sound in which he and Pavement were initially vaunted as leaders and pioneers – was nothing if not insistently sonic – it was all about the grain of guitar textures, about gratuitously over-done treatments and ear-grabbing effects. Noise for noise’s sake. It’s just that it was looking to older modes and antiquated technology. From the Big Muff and the Cry Baby Wah pedal through to today’s deliberately distorted deployment of pitch-correction, there’s really an unbroken continuity: the creative misuse of technology, the aestheticization of mistakes and flaws, wrongness-as-rightness.

As Stephen tweeted recently on the subject of Auto-Tune’s omnipresence in contemporary music-making: “We long 4 transformation….and we humans fucking luv tools.” 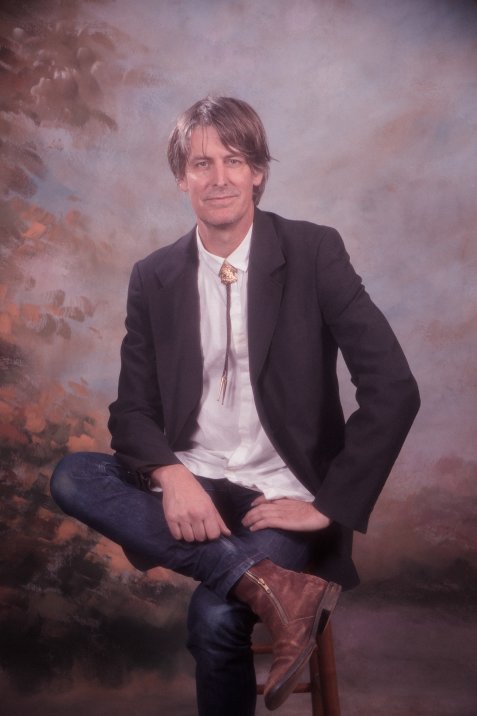 Stephen Malkmus has some solo dates lined up, hopefully there will be a San Diego show added before the tour is over.